Shakespeare and the Play Scripts of Private Prayer [Kietas viršelis] 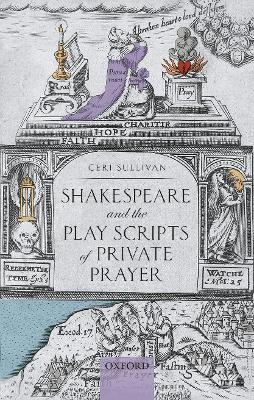 Didesnis paveikslėlis
Kitos knygos pagal šią temą:
Pastovi nuoroda: https://www.kriso.lt/db/9780198857310.html
Early modern private prayer is skilled at narrative and drama. In manuals and sermons on how to pray, collections of model prayers, scholarly treatises about biblical petitions, and popular tracts about life crises prompting calls to God, prayer is valued as a powerful agent of change. Model prayers create stories about people in distinct ranks and jobs, with concrete details about real-life situations. These characters may act in play-lets, or appear in the middle of difficulties, or voice a suite of petitions from all sides of a conflict. Thinking of early modern private prayers as dramatic dialogues rather than lyric monologues raises the question of whether play-going and praying were mutually reinforcing practices. Could dramatists deploying prayer on stage rely on having audience members who were already expert at making up roles for themselves in prayer, and who expected their petitions to have the power to intervene in major events? Does prayer's focus on cause and effect structure the historiography of Shakespeare's Henry VI, Richard III, Richard II, Henry V, and Henry VIII?
Show moreShow less
1: Introduction: Creativity in Private Prayers 2: Techniques to Compose Private Prayers 3: Scripting a Role for the Speaker of Private Prayer: 2 and 3 Henry VI 4: Discerning a Response to Private Prayer: Richard III and Henry V 5: The Special Case of Royal Private Prayer: Henry VIII and Richard II 6: Afterword: Staging Private Prayer Appendix A. Sample contents pages of printed private prayer books Appendix B. Sample prayers on childbirth Appendix C. Sample prayers on work
Ceri Sullivan is a Professor of English Literature at Cardiff University, and the author of five books about the literary features that structure early modern texts about religion, trade, bureaucracy, and rhetoric. She was educated at the University of Oxford, and was formerly a banking systems analyst in the City of London and an NGO worker in sub-Saharan Africa.
Show moreShow less
Prisijungti Naujas vartotojas