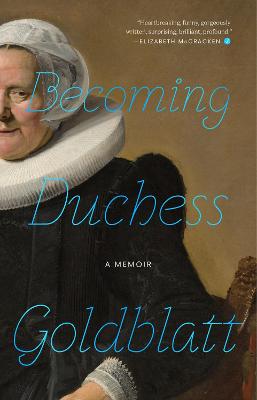 "Part memoir and part joyful romp through the fields of imagination, the story behind a beloved pseudonymous Twitter account reveals how a writer deep in grief rebuilt a life worth living"--

&#34;Unforgettable...Behind her brilliantly witty and uplifting message is a remarkable vulnerability and candor that reminds us that we are not alone in our struggles&;and that we can, against all odds, get through them.&#34; &;Lori Gottlieb, New York Times-bestselling author of Maybe You Should Talk to Someone

Part memoir and part joyful romp through the fields of imagination, the story behind a beloved&#160;pseudonymous Twitter account reveals how a writer deep in grief rebuilt a life worth living.

Becoming Duchess Goldblatt&#160;is two stories: that of the reclusive real-life writer who created a fictional character&#160;out of loneliness and thin air, and that of the magical Duchess Goldblatt herself, a bright light in the darkness of social media. Fans around the world are drawn to Her Grace&;s voice, her wit, her life-affirming love for all humanity, and the fun and friendship of the community that&;s sprung up around her.
&#160;
@DuchessGoldblat (81 year-old literary icon, author of An Axe to Grind) brought people together in her name: in bookstores, museums, concerts, and coffee shops, and along the way, brought real friends home&;foremost among them, Lyle Lovett.
&#160;&#160;
&;The only way to be reliably sure that the hero gets the girl at the end of the story is to be both the hero and the girl yourself.&; &; Duchess Goldblatt

Part memoir and part joyful romp through the fields of imagination, the story behind a beloved&#160;pseudonymous Twitter personality reveals how a writer deep in grief rebuilt a life worth living.
Show moreShow less

Show moreShow less
DUCHESS GOLDBLATT, 81, is the inspirational author of An Axe to Grind; Feasting on the Carcasses of My Enemies: A Love Story; and the heartwarming meditation on mothers and daughters Not If I Kill You First. A cultural icon, trophy ex-wife, friend to all humanity, and sponsor of the prestigious Goldblatt Prize in Fiction, she lives in Crooked Path, NY. She's fictional but her love is real. ANONYMOUS, the real-life person in whose mind Duchess Goldblatt lives and flourishes, has gathered all available truth and beauty for these pages. There's nothing else to give.
Show moreShow less
Prisijungti Naujas vartotojas