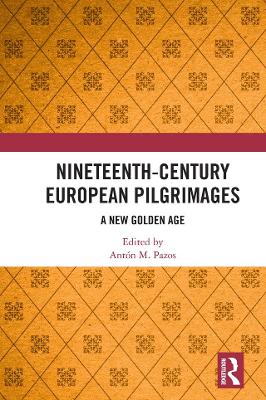 During the Nineteenth-Century a major revival in religious pilgrimage took place across Europe. This phenomenon was largely started by the rediscovery of several holy burial places such as Assisi, Milano, Venice, Rome and Santiago de Compostela, and subsequently developed into the formation of new holy sites that could be visited and interacted with in a wholly Modern way. This uniquely wide-ranging collection sets out the historic context of the formation of contemporary European pilgrimage in order to better understand its role in religious expression today.

Looking at both Western Catholic and Eastern Orthodox Europe, an international panel of contributors analyse the revival of some major Christian shrines, cults and pilgrimages that happened after the rediscovery of ancient holy burial sites or the constitution of new shrines in locations claiming apparitions of the Virgin Mary. They also shed new light on the origin and development of new sanctuaries and pilgrimages in France and the Holy Land during the Nineteenth Century, which led to fresh ways of understanding the pilgrimage experience and had a profound effect on religion across Europe.

This collection offers a renewed overview of the development of Modern European pilgrimage that used intensively the new techniques of organisation and travel implemented in the Nineteenth-Century. As such, it will appeal to scholars of Religious Studies, Pilgrimage and Religious History as well as Anthropology, Art, Cultural Studies, and Sociology.

Show moreShow less
A New Golden Age of Pilgrimages- Anton M. Pazos; 1 The Medieval Revival: Romanticism, Archaeology and Architecture-Christopher Gerrard; 2 The Roman Catacombs in the Nineteenth Century: 'Cradle and Archive of the Catholic Church'-Massimiliano Ghilardi; PART 1 Jerusalem, Rome and Santiago de Compostela; 3 Geopietism and Pilgrimage/Tourism to the Holy Land/Palestine (1850-1918), and the case of Thomas Cook-Ruth Kark; 4 The Grand Tour and After: Secular Pilgrimage to Rome from the Eighteenth to the Twentieth Centuries-Stephen L. Dyson; 5 Compostela, Rome and the Revival of the Pilgrimages to Santiago-Anton M. Pazos;PART 2 Western Europe;6 The Golden Age of Pilgrimages in France in the Nineteenth-Century-Marc Agostino; 7 Sacred Archaeology in Nineteenth-Century England-Isaac Sastre de Diego; 8 The Path to Pilgrimage: Travel and Devotion in the British Press-Milagrosa Romero Samper; 9 Pilgrimages, Modernity, and Ultramontanism in Germany-Olaf Blaschke; PART 3 Eastern Europe; 10 Pilgrimage in Times of Trial: The Pilgrimage Movement and Sanctuaries in Polish Lands in the Second Half of the 19th Century-Jan Perszon; 11 Orthodox Faith on the Move in Late Imperial Russia-Christine Worobec; 12 Pilgrimage and the Becoming of Athonite Monasticism-Rene Gothoni; 13 Pilgrimage to the Miraculous Church of the Annunciation, Tinos, Greece-Jill Dubisch; Lessons from a Golden Age: Piety, Publicity and Mobility in Nineteenth-Century European Pilgrimages-Simon Coleman
Anton M. Pazos is currently a member of the Pontifical Committee of Historical Sciences and Vice President of the International Commission for History and Studies of Christianity (CIHEC). He is also Deputy Director of the Instituto de Estudios Gallegos Padre Sarmiento (IEGPS), Spanish National Research Council (CSIC) in Santiago de Compostela, Spain, and a member of the editorial committees of the journals Hispania Sacra and Cuadernos de Estudios Gallegos. At the IEGPS he is the coordinator of a line of research into pilgrimage, which has been the driving force behind several research projects, especially in the organisation of the International Colloquia Compostela.
Show moreShow less
Prisijungti Naujas vartotojas