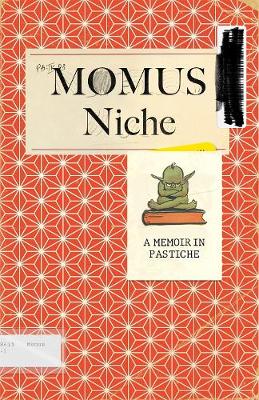 Didesnis paveikslėlis
Kitos knygos pagal šią temą:
Pastovi nuoroda: https://www.kriso.lt/db/9780374144081.html
Raktažodžiai:
"Nick Currie, AKA Momus-named for the ancient Greek god of mockery, and described by The Guardian as "the David Bowie of the art-pop underground"-has recorded over thirty albums, published half a dozen works of speculative fiction, and written articles for The New York Times, Wired, ArtForum, Frieze, and The Wire. This is his story. Or, rather, stories"--

This is that rare show-biz memoir that's both entertaining and a literary triumph. --Publishers Weekly (starred review) "Here then we have, at long last, the story of Momus, i.e. the Phylogeny of Nick Currie, as chronicled through the eyes of the Greats, a curious artifact securing its rightful place within the Canon--as if Orson Welles had directed Spinal Tap . . . in other words, essential Momus." --Ariel Pink, musician [ A] grand entertainment, effortlessly blending pop culture and high culture. --Kirkus (starred review) Niche is the first book I have seen in five years which begins to merit the accolade of masterpiece. --Christian Kracht, author of The Dead and Imperium "Momus's Niche is just an extraordinary thing, wicked, hilarious, sinuously deep, thought through like a circuit, with prose that made mine attack me out of envy. The most exciting life story I've read in possibly forever." --Dennis Cooper, author of The Marbled Swarm Diarist, novelist, satirist, lyricist beyond peer. Herein is spun the tale of the immortally fabulous life and glittering times of our dodgy Anthropocene's greatest still-living songwriter, as related by a chorus of eerie, mocking, sometimes supportive, often judgmental post-mortem Raudive voices in a seance spanning centuries of ectoplasmic 'I told you so.' Here is why Momus may one day be canonized the first saint of a religion yet to be dreamed . . . Read, be enlightened, and pretend you always knew. --Grant Morrison, comic book writer and superfan Named after the Greek god of mockery, Momus became the poster boy of a particularly knowing, particularly literary kind of post-punk-post-pop that was as indebted to Roland Barthes as much as it was Jaques Brel. --Josh Baines, Vice Momus is the David Bowie of the art-pop underground. --Julian Gough, The Guardian

Show moreShow less
Momus, born Nick Currie, is a Scot who makes songs, books, and art. He is the author of The Book of Jokes and The Book of Scotlands. In 2018, Cherry Red Records reissued his classic '80s and '90s albums for Creation Records in definitive and expanded editions. Momus lives between Berlin and Paris.
Show moreShow less
Prisijungti Naujas vartotojas