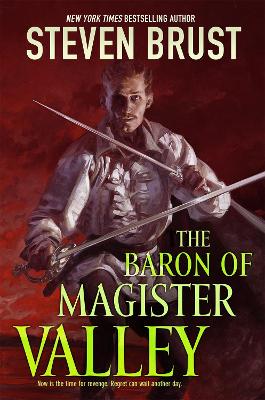 Didesnis paveikslėlis
Kitos knygos pagal šią temą:
Pastovi nuoroda: https://www.kriso.lt/db/9781250311474.html
Imprisoned over the centuries, a nobleman who was betrayed by those he trusted plots and executes his escape and seeks revenge, in the latest addition to the series following The Lord of Castle Black. 40,000 first printing.

Reader, you will undoubtedly have had the misfortune of consuming the rotten fruit of fallacies that we—Paarfi of Roundwood (esteemed historian of House of Hawk and exquisite artisan of truths)—“borrow” our factual recount of Dragaeran history from some obscure fellow who goes by the name Al Dumas or some silly nomenclature of that nature.

The salacious claims that The Baron of Magister Valley bears any resemblance to a certain nearly fictional narrative about an infamous count are unfounded (we do not dabble in tall tales. The occasional moderately stretched? Yes. But never tall).

Our tale is that of a nobleman who is betrayed by those he trusted, and subsequently imprisoned. After centuries of confinement, he contrives to escape and prepares to avenge himself against his betrayers.

A mirror image of The Count of Monte Cristo, vitrolic naysayers still grouse? Well, that is nearly and utterly false.

Standalones in The Khaavren Romances Series
1. The Phoenix Guards
2. Five Hundred Years After
3. The Paths of the Dead
4. The Lorde of Castle Black
5. Sethra Lavode
6. The Baron of Magister Valley: A Viscount of Adrilankha Novel