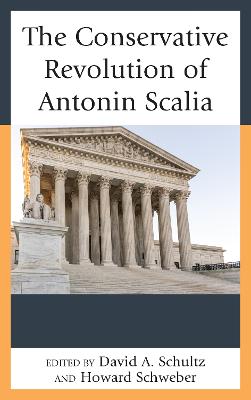 Didesnis paveikslėlis
Kitos knygos pagal šią temą:
Pastovi nuoroda: https://www.kriso.lt/db/9781498564502.html
Raktažodžiai:
Many hoped or feared that Antonin Scalia's appointment to the Supreme Court in 1986 would guarantee a conservative counter-revolution that would reverse the liberal jurisprudence of the Supreme Court under Chief Justice Earl Warren and which was continued to some extent under the Burger Court though the influence of Justice William Brennan. In addition, President Reagan described Scalia's nomination as part of a project to remake the role of the Court, promote an interpretive approach of originalism, and shift authority and discretion to the States. Yet by the time of his death in 2016 it was unclear to what extent Scalia had effected the legal, institutional, or political revolutions that had been anticipated. While the Court did move to the right doctrinally, and reversed or modified many Vinson-Warren-Burger precedents, Scalia's influence on constitutional jurisprudence turned out to be far less than it could have been, and his ability to persuade other Justices to adopt his legal views-both substantively and methodologically-was less than many mainstream media accounts recognize. Scalia's institutional and political legacies are similarly complex: he was neither as transformative a figure as some of his allies might have hoped nor so unimportant as some of his detractors might have wished. The fact that his death and the controversy surrounding his replacement is so intense speaks to the fragile legacy that Scalia really has had on the Supreme Court after 30 years. This book will assess Scalia's legacy in an edited volume that assembles leading legal and political science scholars who will evaluate his impact across a range of jurisprudential, institutional, and political issues.
Show moreShow less

Love him or hate him, everyone who cares about American law wonders what the legacy of fiery Justice Antonin Scalia will be. This comprehensive volume tackles that question by looking at his addition to the Court, his jurisprudence there, and his role as a public intellectual and political actor. Dissatisfied with just cataloging his opinions, concurrences, and dissents, the authors use a variety of approaches to evaluate Justice Scalia holistically. In addition to providing striking insights about the late Justice and his significance, the volume provides an instructive stroll through the diversity of ways in which political scientists think about law and judging. A must read for any serious Supreme Court scholar as well as for both fans and opponents of Justice Scalia. -- Julie Novkov, University at Albany, SUNY The death of Antonin Scalia on February 13, 2016, marked the end of one of the most consequential careers in American legal history. In 30 years on the Supreme Court, Scalia introduced, articulated, and defended a pathbreaking school of constitutional (and political) thinking, doing so with a jaunty and caustic writing style that was utterly distinctive. This edited volume, featuring 14 chapters by scholarly contributors from the fields of political science, criminal justice, and law, assesses Scalia's legacy. The chapters include appraisals of Scalia's jurisprudence, an examination of the impact of his confirmation hearing, and analysis of his role as the avatar of originalism, the idea that the provisions of the Constitution should be interpreted in a way that reflects the intentions of the drafters of those provisions. A controversial doctrine, originalism itself is scrutinized throughout the book, and also in one dedicated chapter. The volume concludes with a contemplation of whether Scalia was a "great" Supreme Court justice, a complicated question about a seminal intellectual thinker on the Court, but one who was not always able to assemble a coalition of colleagues to sign onto his judicial philosophy. Summing Up: Highly recommended. Upper-division undergraduates through faculty. * CHOICE *