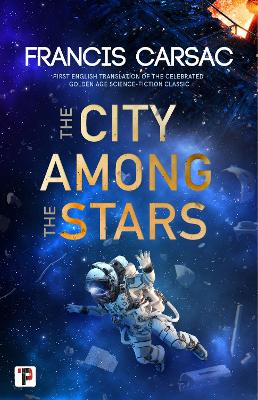 Didesnis paveikslėlis
Kitos knygos pagal šią temą:
Pastovi nuoroda: https://www.kriso.lt/db/9781787584228.html
A soldier of the Empire of Earth floats through space, his spaceship destroyed by sabotage. He is saved by a ‘city-in-space’ whose people despise those born and raised on a planet. Out of spite, he refuses to deliver the one piece of knowledge that can protect the people who saved but now spurn him - leading to catastrophic consequences.

Tankar Holroy, Lieutenant in the Stellar Guard of earth’s Empire, floats in space after his spaceship is sabotaged. Rescued by an enormous, unknown ship, he awakes to discover himself saved by the People of the Stars who are born and live in space with minimal contact with planets and their occupants whom they call, with contempt, planetaries.

The chilly welcome he receives from the ship’s leader, the Teknor, is followed by overt hostility from the other inhabitants of the Tilsin. Only a woman named Orena reaches out to him.

Tankar soon realizes that he was rescued for his knowledge of tracers, the technology that allows Empire ships to track others through hyperspace, a technology the People of the Stars lack. Out of spite, he refuses to deliver the one piece of knowledge that can protect the people who saved but now spurn him - and the consequences will be catastrophic.

"Most of the world knew Francois Bordes as one of the world's leading paleoanthropologists. His The Old Stone Age was required reading for generations of archaeologists. Long considered one of France's giants of science fiction, and writing under the pen name Francis Carsac, his The City of the Stars is now available in English translation. This stunning classic stands shoulder-to-shoulder with Arthur C. Clarke, Asimov, and Heinlein." - New York Times and USA Today bestselling authors W. Michael Gear and Kathleen O'Neal Gear "A dramatic exploration of belonging and the weight of unintended consequences set within twin wars, The City Among the Stars revives the golden age of science fiction for a new audience." "Devotees of classic sci-fi will appreciate this translation." "Riveting and introspective, The City among the Stars is a novel that readers will devour in one sitting, anticipating the turn of every page."

Show moreShow less
Francis Carsac, a pseudonym for the world-renowned French scientist, geologist, and archaeologist Francois Bordes, wrote and published six novels during the golden age of science fiction. Never before published in English, these novels resonate with timely issues ranging from climate control to racism and greed and tell the stories of characters whose challenges and triumphs clearly relate to many of the problems we encounter today. He has been translated and published into Russian, Romanian, Bulgarian, Lithuanian, Latvian, Hungarian, Estonian amongst others.
Show moreShow less
Prisijungti Naujas vartotojas