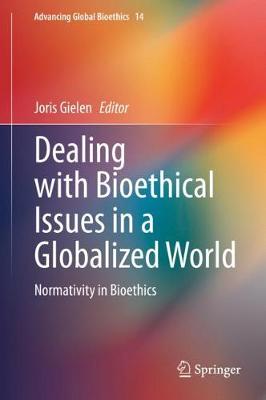 Didesnis paveikslėlis
Kitos knygos pagal šią temą:
Pastovi nuoroda: https://www.kriso.lt/db/9783030304317.html
This book addresses the complexity of talking about normativity in bioethics within the context of contemporary multicultural and multi-religious society. It offers original contributions by specialists in bioethics exploring new ways of understanding normativity in bioethics. In bioethical publications and debates, the concept of normativity is often used without consideration of the difficulties surrounding it, whereas there are many competing claims for normativity within bioethics. Examples of such competing normative bioethical discourses can be perceived in variations and differences in bioethical arguments within individual religions, and the opposition between bioethical arguments from specific religions and arguments from bioethicists who do not claim religious allegiance. We also cannot merely assume that a Western understanding of normative bioethics will be unproblematic in bioethics in non-Western cultures and religions. Through an analysis of normativity in Christian, Hindu, Buddhist, Islamic, and Jewish bioethics, the book creates awareness of the complexity of normativity in bioethics. The book also covers normative bioethics outside an explicitly religiously committed context, and specific attention is paid to bioethics as an interdisciplinary endeavor. It reveals how normativity relates to empirical and global bioethics, which challenges it faces in bioethics in secular pluralistic society, and how to overcome these. By doing that, this book fills an important gap in bioethics literature.
Show moreShow less
1 Introduction: Normativity in Context (Joris Gielen) Part 1: Normative Bioethics in Religious Traditions
2. Introduction to Part 1: Normative Bioethics in Religious Traditions (Joris Gielen) 3 Normativity in Islamic Bioethics (Kiarash Aramesh) 4 Advancing Death? Discourse and Authority in Judaic Bioethics (Jonathan K. Crane) 5 Using the Imagination in Normative Moral Reasoning around the Principle of Double Effect to foster Doctrinal Development in Catholic Bioethics (Gerard Magill) 6 Normative Bioethics in Hinduism (Joris Gielen) 7 Normativity in Buddhism and its Application in Bioethics (Soraj Hongladarom) Part 2: Normativity at Crossroads 8 Introduction to Part 2: Normativity at Crossroads (Joris Gielen) 9 Combining Empirical Data and Normativity: possible or not? (Rouven Porz and Pascal Borry) 10 Normativity and Global Bioethics (Henk ten Have) 11 Bioethics in Secular, Pluralistic Society (Joris Gielen) 12 Narrative Authority: A Key to Culturally Competent Healthcare (Fahmida Hossain) 13 The Authority of the Ethics Consultant (Kenneth Kipnis)
Joris Gielen is director of the Center for Healthcare Ethics at Duquesne University in Pittsburgh. He studied history, religious studies and theology at University of Leuven (Catholic University of Leuven, Belgium) and Indian philosophy at Banaras Hindu University (Varanasi, India). In his research, he focuses on religion, spirituality and ethics in palliative care from a global perspective. He has conducted research projects in Belgium, the US, and India. A special area of interest is the role of religion in the experiences of patients, their family members, physicians and nurses in palliative care in North India and how religion and spirituality influence medical decision-making.
Show moreShow less
Prisijungti Naujas vartotojas