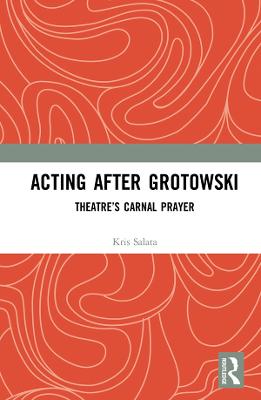 For whom does the actor perform? To answer this foundational question of the actor’s art, Grotowski scholar Kris Salata explores acting as a self-revelatory action, introduces Grotowski’s concept of "carnal prayer," and develops an interdisciplinary theory of acting and spectating.

attempts to overcome the religious/secular binary by treating "prayer" as a pre-religious, originary deed, and ultimately situates theatre along with ritual in their shared territory of play

Grounded in theatre practice, Salata’s narrative moves through postmodern philosophy, critical theory, theatre, performance, ritual, and religious studies, concluding that the fundamental structure of prayer, which underpins the actor’s deed, can be found in any self-revelatory creative act.

Acting After Grotowski goes to the heart of the actor's work: not merely why we act, nor how, but, rather, the foundational inseparability of these two questions. Ranging freely across disciplines, from theatre, to philosophy, to religious studies, to neuroscience, Salata investigates the "Grotowski Question" - for whom do I perform? - seeking answers in both the legacy of practice embodied in the contemporary investigations of the Workcenter of Jerzy Grotowski and Thomas Richards, and in Grotowski's own writings on two key, hitherto under-examined, concepts: the "secure partner" and "carnal prayer." Rooting his analysis in a phenomenological approach to the scholar's act of bearing witness, Salata has written a groundbreaking, interdisciplinary work which speaks to multiple audiences: theatre artists, theatre scholars, and philosophers concerned with the nature of human encounter, and performance as embodied philosophical praxis. Dr. Kathryn Mederos Syssoyeva, author/editor: A History of Collective Creation, Collective Creation in Collective Performance, and Women, Collective Creation, and Devised Performance.

Show moreShow less
Preface. Introduction.
1. Grotowski's Carnal Prayer
2. Two Performances of Prayer
3. The Rhizome of Working Points
4. For Whom Should I Perform?
5. On Prayer
6. The Event of the Encounter, the Event of Prayer. Epilogue.
Kris Salata is Professor at the School of Theatre, College of Fine Arts in Florida State University, U.S.A.
Show moreShow less