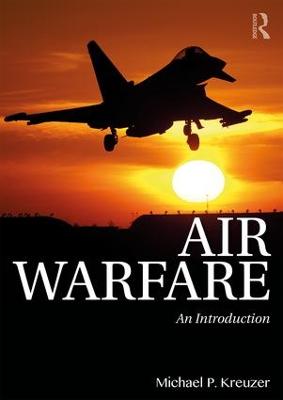 This accessible new textbook provides a thorough grounding in the vocabulary, concepts, issues and debates associated with air power and aerial conflict.

Despite being one of the most commonly relied upon forms of prosecuting modern conflict, few outside the military understand the tactics, equipment, and organizations associated with prosecuting an air campaign nor the relationship of air warfare to other domains of combat. The goal of this book is to take the complexity of air warfare and provide a clear, coherent understanding of the unique features of air warfare necessary for policymakers and students alike to follow the nuances of debates over the use of airpower in conflicts.

Understanding Air Warfare is divided into two main sections, with the first looking at the underlying concepts of war and what is meant by air warfare and the air domain, and the second section examining air warfare in operations and tactics. It covers such issues as:

- Conceptual overview of the theory and practice of air warfare to date;

- Airpower as a coercive political tool outside of conflict;

- Aerial combat and the process of gaining air superiority;

- Issues for the future of air warfare.

This book will be essential reading for students of air power and air warfare, and highly recommended for students of strategic studies, military theory and defence studies.

Show moreShow less
1: Introduction 2: Warfare and the Air Domain 3: The History of Airpower in Theory and Practice 4: Airpower and Coercive Diplomacy 5: Gaining Command of the Air: Air Defense and Air Superiority 6: Exploiting Air Superiority 7: Robotics, Cyberspace, and Future Challenges for Air Warfare
Michael P. Kreuzer is Chief of Analysis Enterprise Management, Air Combat Command, US Air Force, and has a PhD in International Relations from Princeton University. He is author of Drones and the Future of Air Warfare (Routledge 2016).
Show moreShow less
Prisijungti Naujas vartotojas