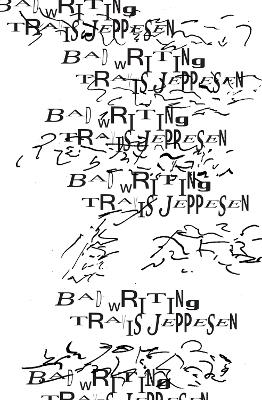 Essays that forge a path to a truly radical “bad” modernism in art and literature.

What, exactly, constitutes the “bad”? Can one consciously produce in the name of “badness,” or is badness a value judgment that comes after the fact, from an Other? How does one begin to assign aesthetic value to an object? If one is to accept the “bad” as “good,” or to find aesthetic value in badness, then when does the bad succeed and when does it fail? If, pace Beckett, we are to embrace failure as an inevitable goal, then isn't it necessary to invent a new mode of criticism that accommodates this aesthetic reality?

Travis Jeppesen's Bad Writing offers a series of interconnected essays, many of which appear in print for the first time, forging a pathway for a truly radical “bad” modernism in art and literature. He explores the terrain of failure, assessing the situation of the twenty-first century literary avant-garde; considers the work of perennial outsiders; and offers “ficto-criticisms,” including his controversial, no-holds-barred takedown of the 2015 Venice Biennale, originally published in Art in America. Erudite, irreverent, witty, and occasionally controversial, Bad Writing reinvigorates the too-often staid medium of art criticism as an iconoclastic and inventive literary art form.