Book of Orchids: A Life-Size Guide to Six Hundred Species from Around the World [Kietas viršelis] 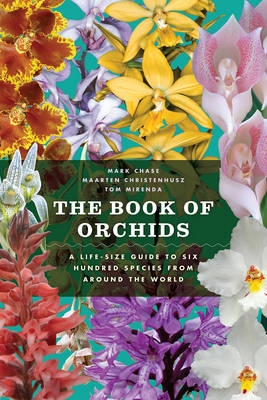 Didesnis paveikslėlis
Kitos knygos pagal šią temą:
Pastovi nuoroda: https://www.kriso.lt/db/9780226224527.html
Raktažodžiai:
One in every seven flowering plants on earth is an orchid. Yet orchids retain an air of exotic mystery—and they remain remarkably misunderstood and underappreciated. The orchid family contains an astonishing array of colors, forms, and smells that captivate growers from all walks of life across the globe. Though undeniably elegant, the popular moth orchid—a grocery store standard—is a bland stand-in when compared with its thousands of more complex and fascinating brethren, such as the Demon Queller, which grows in dark forests where its lovely blooms are believed to chase evil forces away. There is the Fetid Sun-God, an orchid which lures female flies to lay their eggs on its flowers by emitting a scent of rancid cheese. Or the rare, delicate Lizard Orchid, which mimics the appearance of lizards but smells distinctly of goat.

The Book of Orchids revels in the diversity and oddity of these beguiling plants. Six hundred of the world’s most intriguing orchids are displayed, along with life-size photographs that capture botanical detail, as well as information about distribution, peak flowering period, and each species’ unique attributes, both natural and cultural. With over 28,000 known species—and more being discovered each year—the orchid family is arguably the largest and most geographically widespread of the flowering plant families. Including the most up-to-date science and accessibly written by botanists Mark Chase and Maarten Christenhusz, each entry in The Book of Orchids will entice both researchers and orchid enthusiasts alike.

Orchids are diverse, widespread, and ancient; some research dates certain species back to 120 million years ago. With stunning full-color images, The Book of Orchids is sure to become the go-to reference for these complex, alluring, and extraordinarily adaptable plants.

One of every seven flowering plants on earth is an orchid. Some are stunningly over the top; others almost inconspicuous. The Orchidaceae is the second most widely geographically distributed family, after the grasses, yet reamains one of the least understood. This book will profile 600 species, representing the remarkable and unexpected diversity and complexity in the tqxonomy and phylogeny of these beguiling plants, and the extraordinary means they have evolved in order to ensure the attraction of pollinators. Each species will be photographed to capture its delicate detai, and show life-size, giving a strong visual theme to the book, and each is accompanied by text offering an in-depth species profile.
Show moreShow less

"Beautiful . . . It gives growers and lovers of orchids an insight into amazing plants that they may otherwise never have the good fortune to meet."--The Orchid Review "A luscious coffee-table tome."--Nature "If you are looking for a compendium on these plants, with clean design and a fondness for common names, this hefty five-pound opus will do the trick. Together, [ Christenhusz, Chase, and Mirenda] bring years of expertise, the latest authoritative research, and up-to-date nomenclature to this panoramic guide. The Book of Orchids is a worthy reference, especially for understanding and appreciating the diversity of these fascinating plants. The text is more dense than the uncluttered layout suggests, but that just means that you'll get lots of meat-and-potato fundamentals along with eye-catching dessert."--The American Gardener "For pictures you could not do better than The Book of Orchids. . . . Clear, informative text. It is a superb production, reminding us of the astonishing diversity of these plants."--Times Literary Supplement

Show moreShow less
Mark Chase is a senior research scientist at the Royal Botanic Gardens, Kew, London. He is also adjunct professor at the School of Biological Sciences at the University of London and the School of Plant Biology at the University of Western Australia and a fellow of the Linnean Society and the Royal Society. He coedits Genera Orchidacearum and has contributed to more than 350 publications on plant science. Maarten Christenhusz is a botanist who has worked for the Finnish Museum of Natural History in Helsinki, the Natural History Museum, London, and the Royal Botanic Gardens, Kew, London. He was initiator of the botanical journal Phytotaxa and is deputy editor of the Botanical Journal of the Linnean Society. He has written about 100 scientific and popular publications. Tom Mirenda is Director of Horticulture, Education, and Community Outreach at the Hawaii Tropical Botanical Garden. He frequently lectures on orchid ecology and conservation in the United States and abroad, and is a columnist for Orchids, the magazine of the American Orchid Society.
Show moreShow less
Prisijungti Naujas vartotojas