Case for Space: How the Revolution in Spaceflight Opens Up a Future of Limitless Possibility [Kietas viršelis] 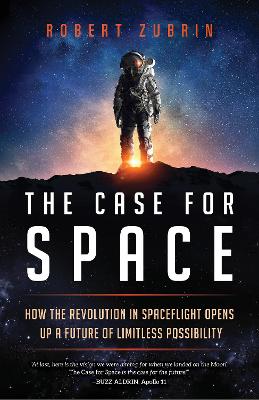 A new space race has begun. But the rivals in this case are not superpowers but competing entrepreneurs. These daring pioneers are creating a revolution in spaceflight that promises to transform the near future. Astronautical engineer Robert Zubrin spells out the potential of these new developments in an engrossing narrative that is visionary yet grounded by a deep understanding of the practical challenges.

Fueled by the combined expertise of the old aerospace industry and the talents of Silicon Valley entrepreneurs, spaceflight is becoming cheaper. The new generation of space explorers has already achieved a major breakthrough by creating reusable rockets. Zubrin foresees more rapid innovation, including global travel from any point on Earth to another in an hour or less; orbital hotels; moon bases with incredible space observatories; human settlements on Mars, the asteroids, and the moons of the outer planets; and then, breaking all limits, pushing onward to the stars.

Zubrin shows how projects that sound like science fiction can actually become reality. But beyond the how, he makes an even more compelling case for why we need to do this--to increase our knowledge of the universe, to make unforeseen discoveries on new frontiers, to harness the natural resources of other planets, to safeguard Earth from stray asteroids, to ensure the future of humanity by expanding beyond its home base, and to protect us from being catastrophically set against each other by the false belief that there isn't enough for all.
Show moreShow less

"The Case for Space demonstrates the author's rare breadth of domain knowledge, which covers engineering, science, economics and policy as well as his depth of knowledge on every significant destination in the solar system from the Moon to the outer planets. In his new book, Zubrin's digs right into the issues of lunar resource extraction, energy generation, manufacturing and transportation that will drive the quick settlement of Earth's 'eighth continent.' Zubrin leaves no moon rock unturned in either closing or rejecting the business case for each idea." -Greg Autry, Contributor, Forbes Magazine * Forbes *

Show moreShow less
Robert Zubrin (Golden, Colorado) is president of Pioneer Astronautics and also president of the Mars Society. For many years he worked as a senior engineer for Lockheed Martin. In addition, he is the author of many critically acclaimed books, including Mars Direct, How to Live on Mars, The Case for Mars (with Richard Wagner), Entering Space, Mars on Earth, Energy Victory, Merchants of Despair; the science fiction novels The Holy Land and First Landing; and articles in Scientific American, the New Atlantis, the New York Times, the Washington Post, Mechanical Engineering, and the American Enterprise. He has appeared on major media including CNN, CSPAN, the BBC, the Discovery Channel, NBC, ABC, and NPR.
Show moreShow less
Prisijungti Naujas vartotojas