Clocking Out: The Machinery of Life in 1960s Italian Cinema [Minkštas viršelis] 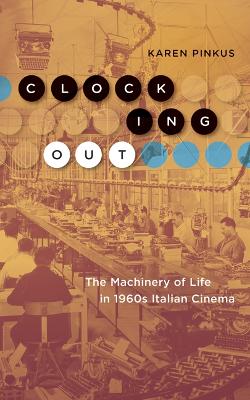 What can 1960s Italian cinema teach us about how to live and work today? Clocking Out challenges readers to think about labor, cinema, and machines as they are intertwined in complex ways in Italian cinema of the early &;60s. Drawing on critical theory and archival research, this book asks what kinds of fractures we might exploit for living otherwise, for resisting traditional narratives, and for anticapitalism.&#160;

Italy in the 1960s was a place where the mass-producing factory was the primary mode of understanding what it meant to work, but it was also a time when things might have gone another way. This thinking and living differently appears in the cracks, lapses, or moments of film. Clocking Out is organized into scenes from an obscure 1962 Italian comedy (Renzo e Luciana, from Boccaccio 70). Reconsidering the origins of paradigms such as clocking in and out, &;society is a factory,&; and the gendered division of labor, Karen Pinkus challenges readers to think through cinema, enabling us to see gaps and breakdowns in the postwar order. She focuses on the Olivetti typewriter company and a little-known film from an Italian anthology movie, thinking with cinema about the power of the Autonomia movement, the refusal to work, and the questions of wages, paternalism, and sexual difference.&#160;

Alternating microscopic attention to details and zooming outward, Pinkus examines rituals of production, automation, repetition, and fractures in a narrative of labor that begins in the 1960s and extends to the present&;the age of the precariat, right-wing resentment, and nostalgia for an order that was probably never was.

"In this wonderfully inventive and beautifully written book, Karen Pinkus adopts a cinematic lens to capture the dynamism of cultural production and social life in early 1960s Italy. But the questions she investigates-about the transformations of work by technology, the relations between humans and machines, and the powers of cinema for social analysis-are just as urgent for understanding today's social world."-Michael Hardt, coauthor of Assembly "Clocking Out is a fascinating analysis of Italy's rapid transition to a modern industrial economy. Using cinema as a way to explore workplaces, machines, and automation in the 1960s, Karen Pinkus provides brilliant insights into human relations and patterns of leisure, gender, and consumption. Well-known for her striking treatments of mediatized realities in such acclaimed books including Bodily Regimes and The Montesi Scandal, in this volume Pinkus forges illuminating connections between 1960s debates and more recent discussions of the digital and the post-human. This volume is essential reading for anyone interested in Italian cinema, modernization, and social change."-Stephen Gundle, University of Warwick

Show moreShow less
Contents Acknowledgments Introduction: Opening Credits
1. The Clock in the Factory
2. Clocking Out
3. Milan, circa 1962
4. "E sempre fattorino"
5. Push-Button Jukebox
6. Hand on Calculator
7. Marriage on the Installment Plan
8. Dance Hall and Movie Theater
9. Night School
10. Milan Beach
11. Shifts Notes Filmography Bibliography
Karen Pinkus is professor of Italian and comparative literature at Cornell University. Among her books are Bodily Regimes: Italian Advertising under Fascism, The Montesi Scandal: The Death of Wilma Montesi and the Birth of the Paparazzi in Fellini's Rome, and Fuel: A Speculative Dictionary (Minnesota, 2016). She is editor of diacritics.
Show moreShow less
Prisijungti Naujas vartotojas