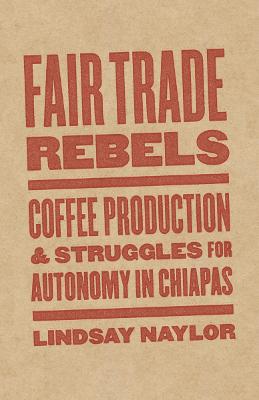 Reassessing interpretations of development with a new approach to fair trade

Is fair trade really fair? Who is it for, and who gets to decide? Fair Trade Rebels addresses such questions in a new way by shifting the focus from the abstract concept of fair trade—and whether it is “working”—to the perspectives of small farmers. It examines the everyday experiences of resistance and agricultural practice among the campesinos/as of Chiapas, Mexico, who struggle for dignified livelihoods in self-declared autonomous communities in the highlands, confronting inequalities locally in what is really a global corporate agricultural chain.

Based on extensive fieldwork, Fair Trade Rebels draws on stories from Chiapas that have emerged from the farmers’ interaction with both the fair-trade–certified marketplace and state violence. Here Lindsay Naylor discusses the racialized and historical backdrop of coffee production and rebel autonomy in the highlands, underscores the divergence of movements for fairer trade and the so-called alternative certified market, traces the network of such movements from the highlands and into the United States, and evaluates existing food sovereignty and diverse economic exchanges.

Putting decolonial thinking in conversation with diverse economies theory, Fair Trade Rebels evaluates fair trade not by the measure of its success or failure but through a unique, place-based approach that expands our understanding of the relationship between fair trade, autonomy, and economic development.

"Fair Trade Rebels makes a critically important contribution to the growing field of diverse economies scholarship by providing an ethnographically rich, nuanced analysis of how diverse economic identities and practices are shaped by multi-scalar power relations and the reinforcement of existing, place-based, political-economic subjectivities. Lindsay Naylor's empirical grounding makes this text especially useful for students who are studying how theoretical constructs manifest in daily practice and looking for methodological tools they might use to answer their own research questions."-Sarah Lyon, University of Kentucky "Fair Trade Rebels does more than offer a vivid case study of Indigenous coffee producers 'in resistance' in Chiapas. Lindsay Naylor's admonition to understand fair trade certification and production as only one strand in a complex web of livelihood, political, and identity practices deployed by communities and organizations is an important corrective to purely market-centric narratives."-Daniel Jaffee, author of Brewing Justice: Fair Trade Coffee, Sustainability, and Survival "Every once in a while, a book comes along that pushes us look at an important debate in a whole new light. Fair Trade Rebels is one of those books, offering a masterful rethinking of the political-economic possibilities of fair trade commerce. Lindsay Naylor skillfully leads readers through familiar arguments-fair trade is an alternative to capitalism, fair trade is a way to make capitalism work for people, fair trade is a neoliberal solution to neoliberal problems. Then she shows how none of those arguments do justice to the inspiring struggles of Mayan coffee producers in highland Chiapas who harness fair trade coffee production to a broader movement for Indigenous autonomy. In this, Fair Trade Rebels paints a gripping picture of Indigenous groups fighting to rework market relations with deep colonial roots into the stuff of resistance."-Aaron Bobrow-Strain, author of Intimate Enemies: Landowners, Power, and Violence in Chiapas