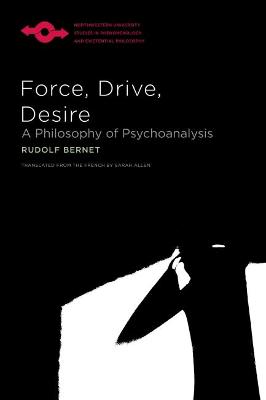 In Force, Drive, Desire, Rudolf Bernet develops a philosophical foundation of psychoanalysis focusing on human drives. Rather than simply drawing up a list of Freud’s borrowings from Schopenhauer and Nietzsche, or Lacan’s from Hegel and Sartre, Bernet orchestrates a dialogue between philosophy and psychoanalysis that goes far beyond what these eminent psychoanalysts knew about philosophy. By relating the writings of Freud, Lacan, and other psychoanalysts to those of Aristotle, Leibniz, Schopenhauer, Nietzsche, Husserl, Heidegger, and, more tacitly, Bergson and Deleuze, Bernet brings to light how psychoanalysis both prolongs and breaks with the history of Western metaphysics and philosophy of nature.

Rereading the long history of metaphysics (or at least a few of its key moments) in light of psychoanalytic inquiries into the nature and function of drive and desire also allows for a rewriting of the history of philosophy. Specifically, it allows Bernet to bring to light a different history of metaphysics, one centered less on Aristotelian substance (ousia) and more on the concept of dunamis—a power or potentiality for a realization toward which it strives with all its might. Relating human drives to metaphysical forces also bears fruit for a renewed philosophy of life and subjectivity.

"This unique book is sure to be a classic. Bernet's masterful study unearths remarkably deep connections between psychoanalytic concepts of drive and desire, and philosophical problems of force, movement, agency, negativity and passivity, offering extraordinary insights into what drives us in our relations to each other and nature." --David Morris, author of Merleau-Ponty's Developmental Ontology "Rudolf Bernet's Force, Drive, Desire is a highly welcome contribution to contemporary philosophy. Bernet offers an impressive, multifaceted account of the fundamental forces that move human beings, individually and collectively. This is crucial not just to phenomenology and psychoanalysis but also to political philosophy, ontology, and metaphysics." --Sara Heinamaa, author of Toward a Phenomenology of Sexual Difference "Clear and erudite, challenging and exciting, this work is a literal tour de force. The aim of Rudolf Bernet's Force, Drive, Desire is nothing less than a renewal of both philosophy and psychoanalysis by way of a powerful reconstruction of the concepts of drive and desire as fundamental to each." --James Dodd, author of Phenomenology, Architecture, and the Built World