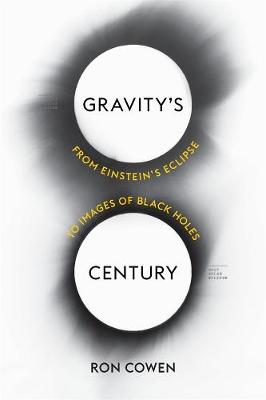 A sweeping account of the century of experimentation that confirmed Einstein’s general theory of relativity, bringing to life the science and scientists at the origins of relativity, the development of radio telescopes, the discovery of black holes and quasars, and the still unresolved place of gravity in quantum theory.

Albert Einstein did nothing of note on May 29, 1919, yet that is when he became immortal. On that day, astronomer Arthur Eddington and his team observed a solar eclipse and found something extraordinary: gravity bends light, just as Einstein predicted. The findings confirmed the theory of general relativity, fundamentally changing our understanding of space and time.

A century later, another group of astronomers is performing a similar experiment on a much larger scale. The Event Horizon Telescope, a globe-spanning array of radio dishes, is examining space surrounding Sagittarius A*, the supermassive black hole at the center of the Milky Way. As Ron Cowen recounts, one foremost goal of the experiment is to determine whether Einstein was right on the details. Gravity lies at the heart of what we don’t know about quantum mechanics, but tantalizing possibilities for deeper insight are offered by black holes. By observing starlight wrapping around Sagittarius A*, the telescope will not only provide the first direct view of an event horizon—a black hole’s point of no return—but will also enable scientists to test Einstein’s theory under the most extreme conditions.

Gravity’s Century shows how we got from the pivotal observations of the 1919 eclipse to the Event Horizon Telescope, and what is at stake today. Breaking down the physics in clear and approachable language, Cowen makes vivid how the quest to understand gravity is really the quest to comprehend the universe.

Ron Cowen offers a sweeping account of the century of experimentation that has consistently confirmed Einstein’s general theory of relativity. He shows how we got from Eddington’s pivotal observations of the 1919 eclipse to the Event Horizon Telescope, aimed at starlight wrapping around the black hole at our galaxy’s center.
Show moreShow less

[ Cowen's] brisk, engaging narrative leads us from Einstein's famous 'thought experiments' through theorists' many (so far unsuccessful) attempts to marry quantum mechanics with general relativity, and up to recent (more successful) efforts to observe gravitational waves and black holes.--Wall Street Journal (05/24/2019) A breezy and enjoyable read, a welcome addition to a crowded shelf of books on these topics.--Peter Coles"Nature" (04/15/2019) A brief, accessible account of the 1919 eclipse and subsequent advances in cosmology, touching upon dark matter, dark energy, quantum gravity, and black holes. It's a very quick and readable introduction to some of the exotic findings that came in Einstein's wake.-- (06/01/2019) A concise chronicle of the dramatic expansion of our knowledge of the universe, from the eclipse expeditions of 1919 to test Einstein's theory of relativity, to the Event Horizon Telescope's black hole images of 2019.--Mike Perricone"Symmetry" (12/10/2019) Accessible and compact...A great introduction to Einstein's theory of general relativity and the century of research that has been testing his ideas since.--Leon Vlieger"Inquisitive Biologist" (09/12/2019) Clear and readily intelligible to the non-specialist.--Johannes E. Riutta"Well-Read Naturalist" (11/17/2019) In a conversational style, the veteran physics writer chronicles the field's greatest hits in the century since a solar eclipse proved Einstein was right.--Gemma Tarlach"Discover" (06/01/2019) There are some extremely clever ways to visualize how gravitation works in a Universe governed by General Relativity under a wide variety of physical conditions, and Cowen explores many of the classic ways you've probably seen before along with some incredibly creative ones that were new, even to me.--Ethan Siegel"Forbes" (11/29/2019) This is as good a short introduction to Einstein's thought as one could wish for.--Simon Ings"The Spectator" (05/11/2019) A clear and compelling narrative about the development of our understanding of gravity and the universe, powered by Einstein and his cohorts. Cowen weaves together the historical and personal events leading to this revolution and brings us up to date with the ideas and speculations that will likely forge an even newer and more radical understanding of the nature of the world.--George F. Smoot, winner of the Nobel Prize in Physics Cowen is a gifted science writer and storyteller, and the story is amazing!--John C. Mather, winner of the Nobel Prize in Physics This gracefully written history of 20th-century gravity research from science writer Cowen shines a light on a key aspect of modern physics...Filled with vivid descriptions of cutting-edge work and the scientists behind it, Cowen's book is fascinating, both a learning experience and a pleasure to read.--Publishers Weekly (starred review) (03/11/2019) Einstein's general theory of relativity radically changed our notions of space, gravity, and time. Gravity's Century takes us from Einstein's struggle to develop his theory up to the modern day--when the detection of gravitational waves from black holes has confirmed general relativity's most audacious claims, even as scientists are still trying to reconcile the theory with the other great idea of twentieth-century physics, quantum mechanics.--David Spergel, Princeton University Gravity's Century is remarkably easy to follow and read. If you are a keen beginner, or just interested in some of the people behind the science, read this book.-- (05/01/2019)