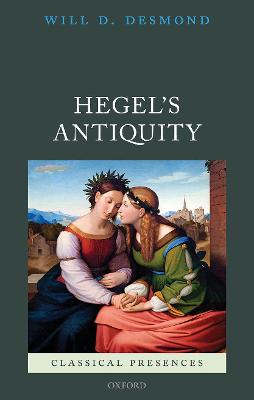 Didesnis paveikslėlis
Kitos knygos pagal šią temą:
Pastovi nuoroda: https://www.kriso.lt/db/9780198839064.html
Hegel's Antiquity aims to summarize, contextualize, and criticize Hegel's understanding and treatment of major aspects of the classical world, approaching each of the major areas of his historical thinking in turn: politics, art, religion, philosophy, and history itself. The discussion excerpts relevant details from a range of Hegel's works, with an eye both to the ancient sources with which he worked, and the contemporary theories (German aesthetic theory, Romanticism, Kantianism, Idealism (including Hegel's own), and emerging historicism) which coloured his readings. What emerges is that Hegel's interest in both Greek and Roman antiquity was profound and is essential for his philosophy, arguably providing the most important components of his vision of world-history: Hegel is generally understood as a thinker of modernity (in various senses), but his modernity can only be understood in essential relation to its predecessors and 'others', notably the Greek world and Roman world whose essential 'spirit' he assimilates to his own notion of Geist.
Show moreShow less
Will Desmond completed his doctorate in classics and philosophy at Yale University, where he was a lecturer for two years before returning to Ireland. After lecturing at University College Dublin, Trinity College Dublin, and the Milltown Institute of Theology and Philosophy, he arrived at the National University of Ireland, Maynooth in 2007. His research interests centre on intellectual history, particularly in the Greek classical period and certain modern receptions of antiquity; recurrent themes include virtue ethics, political philosophy, historiography, and metaphysics. His current research remains interdisciplinary, focusing on nineteenth-century German receptions of both Greek and Roman cultures, especially among Idealist and Romantic writers.
Show moreShow less
Prisijungti Naujas vartotojas