Hegel's Theory of Normativity: The Systematic Foundations of the Philosophical Science of Right [Kietas viršelis] 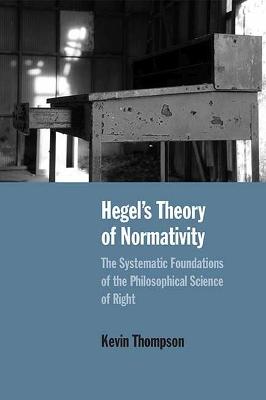 Hegel’s Elements of the Philosophy of Right offers an innovative and important account of normativity, yet the theory set forth there rests on philosophical foundations that have remained largely obscure. In Hegel’s Theory of Normativity, Kevin Thompson proposes an interpretation of the foundations that underlie Hegel’s theory: its method of justification, its concept of freedom, and its account of right. Thompson shows how the systematic character of Hegel’s project together with the metaphysical commitments that follow from its method are essential to secure this theory against the challenges of skepticism and to understand its distinctive contribution to questions regarding normative justification, practical agency, social ontology, and the nature of critique.
Show moreShow less

"This study focuses on a problem that is pervasive in social, political, and ethical situations, what justifies the norms according to which we judge what is right. Thompson develops a clear, tightly organized, textually correct analysis of Hegel's systematic procedure to show what an unshakeable justification of social norms requires. In the process, he challenges with good evidence some of the most influential interpretations of Hegel's political theory." --Ardis Collins, author of Hegel's Phenomenology: The Dialectical Justification of Philosophy's First Principles "Kevin Thompson's book is a well-written and thought-provoking study of Hegel's theory of normativity. The book highlights with clarity, precision, and palpable intellectual energy what is original in Hegel's theory, and in so doing provides a fine introduction to Hegel's political thought for newcomers, as well as an insightful and challenging interpretation for those already familiar with Hegel's philosophy." --Stephen Houlgate, author of The Opening of Hegel's Logic: From Being to Infinity and editor of Hegel and the Arts "An exciting contribution to the Hegel-Renaissance in the United States, especially to the return of Hegel's practical philosophy." --Klaus Vieweg, author of Hegels Phanomenologie des Geistes and Skepsis und Freiheit - Hegel uber den Skeptizismus zwischen Literatur und Philosophie "Hegel's Theory of Normativity is distinctive in defending a systematic, metaphysical account of Hegel's practical philosophy. This is an engaging and well-conceived work." --Timothy L. Brownlee, Xavier University "Thompson has done a superb job of clearly explaining some of the more difficult aspects of Hegel. His book will prove most useful to researchers of Hegel and German idealism, but also to those working on questions of normativity more broadly. Recommended." --Choice