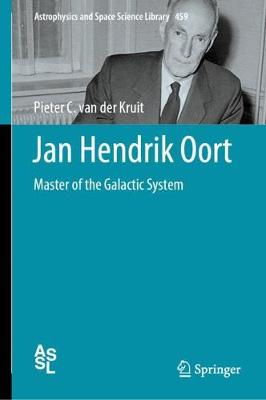 This book is the first thorough and overdue biography of one of the giants of science in the twentieth century, Jan Hendrik Oort. His fundamental contributions had a lasting effect on the development of our insight and a profound influence on the international organization and cooperation in his area of science and on the efforts and contribution of his native country.

This book aims at describing Oort's life and works in the context of the development of his branch of science and as a tribute to a great scientist in a broader sense. The astronomer Jan Hendrik Oort from the Netherlands was founder of studies of the structure and dynamics of the Milky Way Galaxy, initiator of radioastronomy and the European Southern Observatory, and an important contributor to many areas of astronomy, from the study of comets to the universe on the largest scales.

Show moreShow less
Preface.- Acknowledgements.- Growing up in Oegstgeest.- Kapteyn and Groningen.- Stars of High Velocity.- Via Yale to Leiden.- Rotation of the Galaxy; Marriage- Galactic Structures and Dynamics.- The Oort Limit and Galaxy Photometry.- Professor and Adjunct-Director.- World War II: The Watershed.- Opening Up New Avenues.- Spiral Structure, Interstellar Medium and the Crab.- Dwingeloo, ESO, the Vatican and the Cross-Antenna.- Galactic Structure and the Dwingeloo Telescope.- Westerbork, Retirement and Beyond.-
15. The Last Horizon.- Curriculum Vitae, Publications, Honors, Students and Academic Genealogy.- Texts of Selected Documents.- Notes and References.- Index.
Pieter C. van der Kruit is the Jacobus C. Kapteyn Honorary Professor of Astronomy at the Kapteyn Astronomical Institute in Groningen, the Netherlands. He obtained his PhD in astronomy from Leiden University in 1971 under Jan Hendrik Oort. He held a prestigious Carnegie postdoctoral Fellowship at the Mount Wilson and Palomar Observatories in Pasadena, California, before moving to the University of Groningen in 1975. He has held visiting positions at numerous institutions, including the Mount Stromlo Observatory in Canberra, Australia; the Institute of Astronomy in Cambridge, UK; the Space Telescope Science Institute in Baltimore, USA; the European Southern Observatory in Santiago, Chile, the Instituto de Astrofisica de Canarias in Tenerife, Spain, and the Carnegie Observatories in Pasadena, California. His research concerns structure and dynamics of disks in galaxies. He has published over 160 papers, more than half as lead or sole author, contributed substantially to over 20 more, and authored or edited six books. In Groningen he taught introductory astronomy and advanced level courses on structure and dynamics of galaxies for many years, the latter also at a Saas-Fee winter school in Switzerland and in university curricula in Porto, Portugal, in Santiago, Chile and in Beijing, China. He is a former director of the Kapteyn Institute and has been a member and often chairman of numerous national and international boards and committees, notably President of Council of the European Southern Observatory and chairman of the Board for the Atacama Large Millimeter Array ALMA.
Show moreShow less