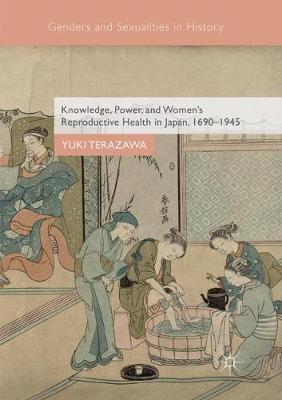 Didesnis paveikslėlis
Kitos knygos pagal šią temą:
Pastovi nuoroda: https://www.kriso.lt/db/9783030103125.html
This book analyzes how women's bodies became a subject and object of modern bio-power by examining the history of women's reproductive health in Japan between the seventeenth century and the mid-twentieth century. Yuki Terazawa combines Foucauldian theory andfeminist ideas with in-depth historical research. She argues that central to the rise of bio-power and the colonization of people by this power was modern scientific taxonomies that classify people into categories of gender, race, nationality, class, age, disability, and disease. Whilediscussions of the roles played by the modern state are of critical importance to this project, significant attention is also paid to the increasing influences of male obstetricians and the parts that trained midwives and public health nurses played in the dissemination of modern powerafter the 1868 Meiji Restoration.
Show moreShow less

"It is a reflection on the Japanese reflection on the body, which will probably be of interest to historians of Japanese medical culture and culture, as well as to historians of other traditions interested in comparative work. ... it is a fascinating reconstruction of a deep and radical transformation that illustrates how a society might have shifted from its tradition to a totally different position because (or thanks to) its desire to align itself with the international community." (Alain Touwaide, Doody's Book Reviews, October, 2018)

Show moreShow less
Chapter
1. Introduction.
Chapter
2. The Reproductive Body of the Goseiho School.- Chaper
3. Changing Perceptions of the Female Body: The Rise of the Kagawa School of Obstetrics.
Chapter
4. The State, Midwives, Expectant Mothers, and Childbirth Reforms from the Meiji through the Early Showa Period (1868-1930s).
Chapter
5. Women's Health Reforms in Japan at the Turn of the Twentieth Century.
Chapter
6. Knowledge, Power, and New Maternal Health Policies (1918-1945).
Chapter
7. Epilogue.- Index
Yuki Terazawa is Associate Professor in History at Hofstra University, USA. She has previously published 'Racializing Bodies through Science in Meiji Japan: The Rise of Race-Based Research in Gynecology' in Morris Low (ed), Building a Modern Japan: Science, Technology, and Medicine in the Meiji Era and Beyond (Palgrave, 2005).
Show moreShow less
Prisijungti Naujas vartotojas