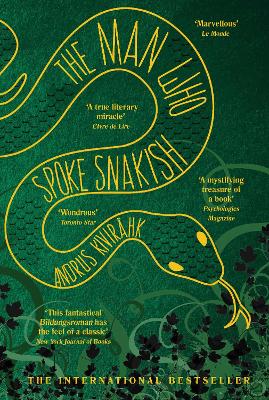 Didesnis paveikslėlis
Kitos knygos pagal šią temą:
Pastovi nuoroda: https://www.kriso.lt/db/9781611855272.html
Unfortunately people and tribes degenerate. They lose their teeth, forget their language, until finally they're bending meekly on the fields and cutting straw with a scythe. Leemut, a young boy growing up in the forest, is content living with his hunter-gatherer family. But when incomprehensible outsiders arrive aboard ships and settle nearby, with an intriguing new religion, the forest begins to empty - people are moving to the village and breaking their backs tilling fields to make bread. Meanwhile, Leemut and the last forest-dwelling humans refuse to adapt: with bare-bottomed primates and their love of ancient traditions, promiscuous bears, and a single giant louse, they live in shacks, keep wolves, and speak to snakes. Told with moving and satirical prose, The Man Who Spoke Snakish is a fiercely imaginative allegory about a boy, and a nation, standing on the brink of dramatic change.
Show moreShow less

The Man Who Spoke Snakish has the feeling of a folktale... This isn't to say that it's a work of light fantasy, however - like Margo Lanagan's 2008 Tender Morsels, there's an undercurrent of violence that keeps the more mirthful aspects at a distance. * Tobias Carroll, Literary Hub * This novel slithers along like the snakes it so admires, agile and often unexpectedly compelling... Its irreverence for convention flows charmingly from its conversational prose... Readable and engaging, it's easy to see how this novel could become the delight of a nation. -- Emma Schneider, Full Stop This allegorical story spins an element of wistful longing for anyone who has struggled between the old and the new, its lessons as relevant today as ever. * Booklist * This novel is totally unusual; it has the same strangeness as La Locura de Dios by Juan Miguel Aguilera or Cold Skin by Albert Sanchez Pinol. The author talks about Estonia (his country) in the 13th century, when 'iron men' invaded the country on a crusade. It jumps between philosophical fable, political pamphlet, Nordic saga, and includes some epic outbursts of violence. * Decitre.fr * Fable-like, timeless... The Man Who Spoke Snakish is a great novel, one of those important books that speaks to your soul in its own language and which marks a milestone on your personal reading history and in the development of your opinions. * Blog des Bouquins * Lots of fun here...but Kivirahk is also concerned with the dangers of war, colonization...and idealizing the past. A big bestseller in Europe. * Library Journal * Epic, fantastical... Most astonishing is the inventive imagery... Kivirahk's well-plotted story of language, loss, and fanaticism speaks powerfully to our world's ever present conflicts. * Kirkus * This translated Estonian treasure follows the adventures of a boy who is the last remaining speaker of Snakish, an ancient language by which he can command any animal. * Entertainment Weekly * [ A] tumultuous Tolkien-like epic set in early medieval Estonia, where forces of modernity and tradition clash in a primeval struggle for the Baltic nation's soul - and it's future... At its essence, this book is a Bildungsroman, a coming of age saga about a young man reconciling with a world experiencing seismic change... A strange, wondrous book. * Robert Collison, Toronto Star * Somewhere near the realms of fantasy and science fiction there exists a much more thrilling and allegorical form of writing, bending the rules of the genre to suit itself... The Man Who Spoke Snakish is an allegory about fading eras and vanishing worlds, and laced with a good dose of black humor to boot. -- Jurgen Rooste, Estonian cultural critic It is good, it is beautiful, you will read it in one sitting, it radiates intelligence... It is a true literary miracle. * L'Ivre de Lire * This fantastical Bildungsroman has the feel of a classic... The novel shines... * New York Journal of Books * An incredible novel, a mystifying treasure of a book. * Psychologies Magazine * Kivirahk provides a compelling and creaturely backdrop for the warring facets of Leemut's coming-of-age... This is an epic fantasy... I felt compelled to continue reading in the certain knowledge that I'd soon stumble upon a scene of great power and beauty or an elegantly aphoristic turn of phrase. -- Dustin Illingworth, Words Without Borders The sense of humour and the imagery resembles a graphic novel or animated film... Probably one of the best contemporary novels about what it means to be alone... Marvelous in all senses of the word. * Le Monde * How to describe the book? Imagine it is the end of the world, and Tolkien, Beckett, Mark Twain, and Miyazaki (with Icelandic sagas and Asterix comic books stuffed under their arms) have got together in a cabin to drink and tell stories around the last bonfire the world will ever see. * Le Magazine Litteraire * The Man who Spoke Snakish is a wild comic swoop through the histories of Estonia, magic, human-powered flight and man-bear relations. At once fantastic and emotionally engaged, underneath the narrative high-jinks lurks a deeply serious novel about how Europe became the way it is. -- Lawrence Norfolk, author of JOHN SATURNALL'S FEAST

Show moreShow less
Andrus Kivirahk is one of Estonia's most highly regarded contemporary writers. A journalist by profession, he is known for his satirical newspaper columns and his bestselling novels. A popular board game has been created on the basis of The Man Who Spoke Snakish. He lives in Tallinn, Estonia. Christopher Moseley is a translator of Estonian and Latvian. He teaches at University College London and is Treasurer of the Foundation for Endangered Languages.
Show moreShow less
Prisijungti Naujas vartotojas