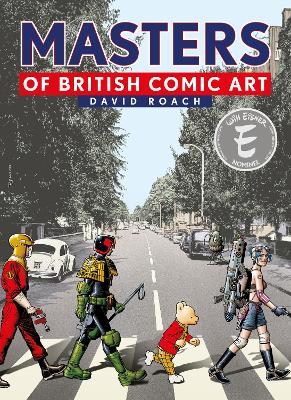 Revealing the extraordinary history of the UK&;s prolific comic book industry from the 19th Century to the 21st, this ground breaking volume celebrates the incredible artists who made a huge impact on British comics and would go on to revolutionize the industry on a global scale. Featuring a Who&;s Who of talent, including Brian Bolland, Yvonne Hutton, Dave Gibbons, celebrated greats such as Don Lawrence and lost masters like Reg Bunn and Shirley Bellwood. Author and 2000 AD artist David Roach takes us on a journey through time detailing the surprising and fascinating evolution of the art from its humble beginnings to its current world-conquering status.

Including artwork from a vast number highly-acclaimed artists, carefully scanned from original artwork, Masters of British Comic Art is the definitive study and celebration of a beloved industry.
Show moreShow less

'A well-researched and ambitious book...Any fan of Britain's comics will derive great pleasure and learn much from it." * Down The Tubes * 'The definitive educational title to bring readers through the journey of comic strips from the perspective of British history... a whole new world of information and staggeringly beautiful art.' * Comic Beat * "Gets its arms around the entire British comics tradition... not just the adventure comics, but also newspaper strips, comics for girls, nursery comics, plus the anarchy of the humor titles, and then pull all the threads into the present day." * The Comics Journal *

Show moreShow less
David Roach stormed on to the 2000 AD scene with Book 8 of Nemesis the Warlock, before going on to illustrate Judge Anderson, Judge Dredd, Killer, Past Imperfect and Synammon as well as providing the inks for Killer and Rogue Trooper. Outside of 2000 AD he has worked on various titles including Batman, Star Wars, Star Trek and Aliens. He has also provided hundreds of illustrations for Wizards of The Coast's classic RPG Dungeons & Dragons.
Show moreShow less
Prisijungti Naujas vartotojas