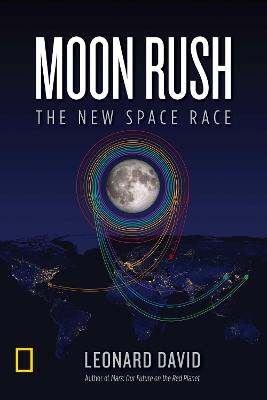 In these rich pages, veteran science journalist Leonard David explores the moon in all its facets, from ancient myth to future "Moon Village" plans. Illustrating his text with maps, graphics, and photographs, David offers inside information about how the United States, allies and competitors, as well as key private corporations like Moon Express and Jeff Bezos's Blue Origin, plan to reach, inhabit, and even harvest the moon in the decades to come.

Spurred on by the Google Lunar XPRIZE--$20 million for the first to get to the moon and send images home--the 21st-century space race back to the moon has become more urgent, and more timely, than ever. Accounts of these new strategies are set against past efforts, including stories never before told about the Apollo missions and Cold War plans for military surveillance and missile launches from the moon. Timely and fascinating, this book sheds new light on our constant lunar companion, offering reasons to gaze up and see it in a different way than ever before.
Show moreShow less

"Leonard David, author of Moon Rush: The New Space Race, sees the Apollo astronauts' scientific work as unfinished, but critical to understanding not only the moon's origins, but also that of our own planet and potential Earth-like exoplanets." -History.com "There's a whole lot of buzz about such possibilities, but David is the first to offer a cohesive vision of what scientists, industry, and the world's space-faring governments have in mind." -Wired "My new book for National Geographic - Moon Rush: The New Space Race - will be launched next May, a volume that explores the Moon in all its facets, from ancient myth to future "Moon Village" plans; inside information about how the United States, allies and competitors, as well as key private corporations like Moon Express and Jeff Bezos's Blue Origin, plan to reach, inhabit, and even harvest the Moon in the decades to come." -Leonarddavid.com/starstruck "Award-winning space journalist Leonard David covers lunar science as well as the other motivations to go to the moon...In addition to a foreword by Buzz Aldrin, there's an afterword by Apollo 17 astronaut Harrison Schmitt, the last person alive to set foot on the moon." -Geekwire "There's a growing commercial and international interest in robotic and human missions to the Moon, stimulated by tried-and-true national prestige or more uncertain business prospects. That's nicely summarized in Moon Rush, the latest book by veteran space journalist Leonard David...But unlike so many other books this year that look backward to Apollo 11 and the early Space Age, most of Moon Rush primarily looks ahead to the future of lunar exploration." -The Space Review

Veteran space journalist digs into the science and technology--past, present, and future--central to our explorations of Earth's only satellite, the space destination most hotly pursued today.
Leonard David is an award-winning space journalist who has been reporting on space activities for over 50 years.
Show moreShow less
Prisijungti Naujas vartotojas