El. knyga: My Daddy is Hilarious 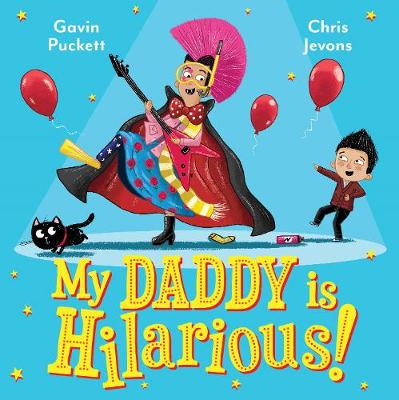 Noticing that his father’s normally sensible appearance is being transformed by outlandish hair styles and eccentric clothing, a little boy eventually figures out that his father is trying on different costumes for a party. By the award-winning author of Murray the Race Horse. Simultaneous eBook. Illustrations.

Now Dad has got a mohawk -
It must be two feet tall!
It's scraping on the ceiling!
Oh, I don't like this at all.

Dad usually looks fairly sensible, so it's a bit surprising when he starts appearing with outlandish new hairstyles! Then things get weirder when he turns up in odd and eccentric clothes! Why can this be? Has he gone mad? No, it's a fancy dress party!

A laugh-a-minute picture book from the Greenhouse Funny Prize winner, Gavin Puckett, and Chris Jevons.
Gavin Puckett lives in South Wales with his wife, his young son and their cat, George. He spends his days working as a school liaison officer with the police and won the Greenhouse Funny Prize in 2013 with his debut book, Murray the Horse. Chris Jevons is a children's book illustrator who lives and works in Harrogate in North Yorkshire. Chris has illustrated over 50 titles, including Bonkers About Beetroot, My Best Friend is A Goldfish and Tommy Tummy-Ache.
Show moreShow less