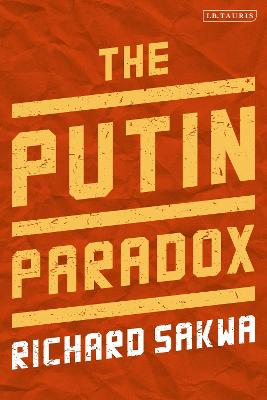 Vladimir Putin has emerged as one of the key leaders of the twenty-first century. However, he is also recognized as one of the most divisive. Abroad, his assertion of Russia's interests and critique of the western-dominated international system has brought him into conflict with Atlantic powers. Within Russia, he has balanced various factions within the elite intelligentsia alongside the wider support of Russian society.

So what is the 'Putin paradox?' Richard Sakwa grapples with Putin's personal and political development on both the international political scene and within the domestic political landscape of Russia. This study historicizes the Putin paradox, through theoretical, historical and political analysis and in light of wider developments in Russian society. Richard Sakwa presents the Putin paradox as a unique regime type - balancing numerous contradictions - in order to adapt to its material environment while maintaining sufficient authority with which to shape it.

An original, up-to-date and comprehensive text on the phenomenon of Putinism in contemporary Russia. * Edwin Bacon, University of Lincoln * The Putin Paradox is the latest take on Russia under Putin by the leading international scholar of his rule. Sakwa's trade mark incisiveness, nuance and innovation are ably demonstrated here. A must read for everyone interested in the fate of modern Russia and its role on the world stage. * Graeme Gill, Professor Emeritus, University of Sydney * Sakwa runs a forensic eye over Russian domestic and foreign policy, placing Putin's leadership in context and exploring the nuances of change and continuity in ideas, policy and strategy. Essential reading. * Andrew Monaghan, Director of Research on Russia, Oxford Changing Character of War Centre. *

The essential personal and political portrait of Vladimir Putin
Richard Sakwa is Professor of Russian and European Politics at the University of Kent, an associate fellow of the Russia and Eurasia programme at Chatham House, and a fellow of the Academy of Social Sciences. His main research interests are Russian domestic and international politics, European international relations and comparative democratization. His recent books include Putin and the Oligarch: The Khodorkovsky - Yukos Affair (I. B. Tauris), Putin Redux: Power and Contradiction in Contemporary Russia, Frontline Ukraine: Crisis in the Borderlands (I. B. Tauris), Russia against the Rest: The Post-Cold War Crisis of World Order, and Russia's Futures.
Show moreShow less
Prisijungti Naujas vartotojas