Slow Professor: Challenging the Culture of Speed in the Academy [Minkštas viršelis] 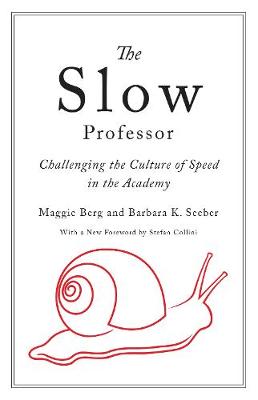 If there is one sector of society that should be cultivating deep thought in itself and others, it is academia. Yet the corporatisation of the contemporary university has sped up the clock, demanding increased speed and efficiency from faculty regardless of the consequences for education and scholarship.

In The Slow Professor, Maggie Berg and Barbara K. Seeber discuss how adopting the principles of the Slow movement in academic life can counter this erosion of humanistic education. Focusing on the individual faculty member and his or her own professional practice, Berg and Seeber present both an analysis of the culture of speed in the academy and ways of alleviating stress while improving teaching, research, and collegiality. The Slow Professor will be a must-read for anyone in academia concerned about the frantic pace of contemporary university life.

In The Slow Professor, Maggie Berg and Barbara K. Seeber discuss how adopting the principles of the Slow movement in academic life can counter the erosion of humanistic education.

'Thoughtful, reflective... The best thing this book accomplishes is its unabashed encouragement to talk to our colleagues in order to increase solidarity and togetherness in the combat against changing and challenging professional environments.' -- Kate Mattocks Journal of Higher Education - September 2016 "The Slow Professor recognizes the psychological strains of academic work, but subtly points toward explicitly political responses to the emotional toxins we absorb; but, it also avoids the fate of most subject-centred therapeutic exercises which are mainly courses in adaptation and resignation. Although it is no call to arms, no manifesto, nor a shout of defiance at the authorities, for insightful readers, the next step beyond self-awareness will be obvious." -- Howard A. Doughty CAUT Bulletin, September, 2016 "It's a beguiling book, written in controlled anger at the corporatized university, overrun by administrators and marketers." -- Rick Salutin The Toronto Star, September 9, 2016 'A welcome part of a crucial conversation.' -- Rachel Hadas Times Literary Supplement, July 29, 2016 "'Thrilling' isn't a word I often apply to books about higher education, but these pages galvanized me." -- Barbara Hunt National Public Radio (NPR), May 13, 2016 "What Maggie Berg and Barbara Seeber are doing in The Slow Professor is protesting against the "corporatization of the contemporary university", and reminding us of a kind of "good" selfishness; theirs is a self-help book that recognises the fact that an institution can only ever be as healthy as the sum of its parts." -- Emma Rees Times Higher Education, May 26, 2016 "The fact that precarious labour is becoming the norm in the academy impacts everyone, including those with tenure." -- Christina Turner Rabble.ca, May 26, 2016 "While The Slow Professor has already raised some eyebrows as an example of "tenured privilege," it's at once an important addition and possible antidote to the growing literature on the corporatization of the university." -- Colleen Flaherty Inside Higher Education, April 19, 2016

"Maggie Berg and Barbara K. Seeber's The Slow Professor: Challenging the Culture of Speed in the Academy (University of Toronto Press) is a much-discussed manifesto that has launched a vitally needed conversation on the importance - and pleasures - of protecting open enquiry from the frantic pace of the modern academic assembly line." -- Susan Prentice, Professor of Sociology, University of Manitoba Times Higher Education, Books of the Year 2016 "The Slow Professor has a manifesto-like quality. But there are more scholarly insights packed into its slim 90-odd pages than you get in longer academic tomes. A must-read, but do take your time." -- Mike Marinetto, Lecturer in Business Ethics, Cardiff University Times Higher Education, Books of the Year 2016 "I love this book. Mentors should give it to newly hired faculty members. Advisors should buy it for their graduating PhDs. Individual faculty should read it to reclaim some of their sanity." -- Nancy Chick, University Chair in Teaching and Learning and Academic Director of the Taylor Institute for Teaching and Learning, University of Calgary "I read this book with the intensity and engagement that I read a novel. It's a fresh and insightful study that reaches out to readers with wisdom as well as information." -- Teresa Mangum, Director of the Obermann Center for Advanced Studies, University of Iowa
Maggie Berg is a professor in the Department of English at Queen's University. A winner of the Chancellor A. Charles Baillie Award for Teaching Excellence, she held the Queen's Chair of Teaching and Learning from 2009 to 2012. Barbara K. Seeber is a professor in the Department of English at Brock University. She received the Brock Faculty of Humanities Award for Excellence in Teaching in 2014.
Show moreShow less
Prisijungti Naujas vartotojas