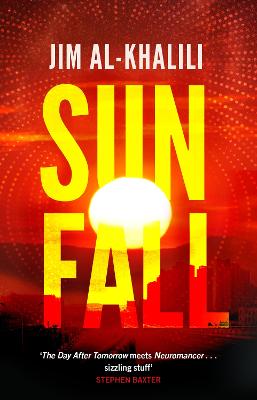 'Excellent, exactly how good science fiction should be: gripping story, beautifully told, while at the same time being scientifically well-informed.' tweeted RICHARD DAWKINS. 'Reminiscent of vintage Arthur C. Clarke . . . has a chilling, nail-biting authenticity' said JAMES LOVEGROVE in the Financial Times. From renowned theoretical physicist, broadcaster and author Jim Al-Khalili, comes this thrilling debut novel drawing on cutting-edge science and set in a near-future full of dazzling technologies. 2041 and the world as we know it grinds to a halt. Our planet seems to be turning against itself - it would appear that the magnetic field, that protects life on Earth from deadly radiation from space, is failing . . . Desperate to quell the mass hysteria that would surely follow, world governments have concealed this rapidly emerging Armageddon. But a young Iranian hacktivist stumbles across the truth, and it becomes a race against time to reactivate the earth's core using beams of dark matter. As a small team of brave and brilliant scientists battle to find a way of transforming theory into practice, they face a fanatical group intent on pursuing their own endgame agenda: for they believe mankind to be a plague upon this earth and will do anything, commit any crime, to ensure that the project fails . . . And so bring about humanity's end.
Show moreShow less

A thrilling futuristic page-turner of a novel in which the future of science, and the technology that underpins it, is as gripping as the plot. -- Professor MARK MIODOWNIK, author of Stuff Matters With its well-crafted world-building, cutting-edge science, and believable, engaging characters caught in a desperate race to stave off the end of the world, this fast-paced near-future thriller is an impressive debut novel from one of our foremost science communicators. Brilliant! -- Professor IAN STEWART, co-author of The Science of Discworld series The Day After Tomorrow meets Neuromancer . . . When the planet's magnetic field fails, the naked sun threatens to deliver an extinction level event now - and every century - unless a high-tech near future humanity can save itself. Sunfall is sizzling stuff. And the best informed techno-thriller you are ever likely to read. -- STEPHEN BAXTER, author of the Xeelee sequence Reminiscent of vintage Arthur C. Clarke . . . has a chilling, nail-biting authenticity. -- James Lovegrove * FINANCIAL TIMES * Excellent, exactly how good science fiction should be: gripping story, beautifully told, while at the same time being scientifically well-informed. -- PROFESSOR RICHARD DAWKINS

Twenty-five years in the future, and our planet is facing a natural Armageddon that threatens all life on Earth - Professor Jim Al-Khalili combines rip-roaring storytelling and mind-expanding science in his debut thriller.
Jim Al-Khalili OBE FRS is a quantum physicist, author and broadcaster based at the University of Surrey where he holds a joint chair in physics and the public engagement in science. He has written ten books, translated into over twenty languages. He is a regular presenter of TV science documentaries and also presents the long-running weekly BBC Radio 4 programme, The Life Scientific. A recipient of the Royal Society Michael Faraday medal, the Institute of Physics Kelvin Medal and the inaugural Stephen Hawking Medal for Science Communication, he is also the current president of the British Science Association. He received an OBE in 2007 for 'services to science' and was elected a fellow of the Royal Society in 2018. Sunfall is his first novel. Jim Al-Khalili lives in Hampshire.
Show moreShow less