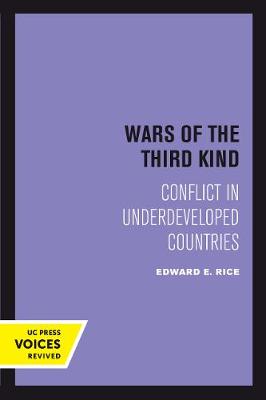 Didesnis paveikslėlis
Kitos knygos pagal šią temą:
Pastovi nuoroda: https://www.kriso.lt/db/9780520304208.html
Most armed conflicts since World War II have been neither conventional nor nuclear, but wars of a third kind, fought in developing nations and involving guerrilla warfare. Edward E. Rice examines historical combat of this sort, including the American Revolution, the Chinese civil war, the Huk rebellion in the Philippines, and conflicts in Algeria, Vietnam, and Latin America. Rice explores the origin, organization, and motivation of these wars and the dangers they pose to the powers that get involved in them.

This title is part of UC Press's Voices Revived program, which commemorates University of California Press’s mission to seek out and cultivate the brightest minds and give them voice, reach, and impact. Drawing on a backlist dating to 1893, Voices Revived makes high-quality, peer-reviewed scholarship accessible once again using print-on-demand technology. This title was originally published in 1988.
Show moreShow less
Edward E. Rice, who spent thirty-four years as an officer in the U.S. Foreign Service, is former Deputy Assistant Secretary of State and the author of Mao's Way, which won a Commonwealth Club medal for nonfiction.
Show moreShow less
Prisijungti Naujas vartotojas