Watsuji on Nature: Japanese Philosophy in the Wake of Heidegger [Kietas viršelis] 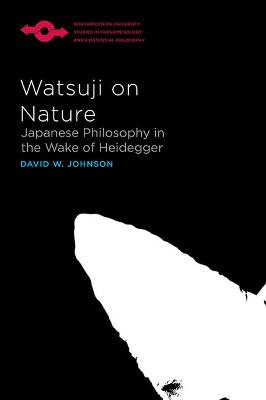 Didesnis paveikslėlis
Kitos knygos pagal šią temą:
Pastovi nuoroda: https://www.kriso.lt/db/9780810140479.html
Raktažodžiai:
In the first study of its kind, David W. Johnson’s Watsuji on Nature reconstructs the astonishing philosophy of nature of Watsuji Tetsuro (1889–1960). Johnson situates Watsuji’s philosophy in relation to his reception of the thought of Heidegger and to his renewal of core ontological positions in classical Confucian and Buddhist philosophy. He shows that for Watsuji we have our being in the lived experience of nature, one in which nature and culture compose a tightly interwoven texture called fudo(<??). By fully unfolding Watsuji’s novel and radical claim that this is a setting that is neither fully external to human subjectivity nor merely a product of it, this book also sets out what still remains unthought in this concept, as well as in the relational structure that underwrites it. Johnson argues that what remains unarticulated is nothing less than the recovery of a reenchanted conception of nature and an elucidation of the wide-ranging implications of a relational conception of the self for questions about the disclosive character of experience, the distinction between fact and value, and the possibility of a place-based ecological ethics.

In an engagingly lucid and deft analysis, Watsuji on Nature radically expands our appreciation of twentieth-century Japanese philosophy and shows what it has to offer to a global philosophical conversation.

Watsuji on Nature demonstrates the way in which the Japanese philosopher Watsuji Tetsuro appropriated and altered Heidegger's notion of being-in-the-world in developing a relational conception of the self and a novel philosophy of nature.
Show moreShow less

"David Johnson has done a masterful job of presenting Watsuji in clear and accessible prose, always grounded in the primary sources and alert to the wider intellectual history of Japan. The contrast with Heidegger is illuminating and helps him to center on the remarkable novelty of Watsuji's thought." --James W. Heisig, author of Nothingness and Desire "This pathbreaking book opens up an area of inquiry at the intersection of philosophy and practical disciplines such as architecture, geography, and climate studies that focus on the interactions between humans and the environment. Avoiding jargon and abstract discussion, it presents Watsuji's philosophy, in conjunction with Heidegger's, in clear, step-by-step explanations and relevant, novel examples." --John C. Maraldo, coeditor of Japanese Philosophy: A Sourcebook "Watsuji on Nature is an excellent study on the relation between Watsuji Tetsuro, one of the most prominent and original modern Japanese philosophers, and Heidegger. Written with nuance and precision, this work advances critical thinking on both the philosophy of nature and the philosophy of the human being in a timely and innovative manner." --Brian Schroeder, coeditor of Japanese and Continental Philosophy: Conversations with the Kyoto School "David Johnson expands the English language reception of Watsuji with the first serious study in this language of fudo, which, through the author's deft, precise, and thorough analysis, allows us to appreciate Watsuji's radical retrieval and reenchantment of nature beyond its objectification by modern science. Fudo emerges as the nonduality and reciprocal interweaving of nature and culture. In winning a renewed and refreshingly provocative sense of this term, Johnson also makes a significant contribution to ways out of our unfolding ecological crisis." --Jason M. Wirth, author of Nietzsche and Other Buddhas: Philosophy After Comparative Philosophy "Johnson's book is based on meticulous research. The relevant literature on Watsuji is well recapitulated, as is the phenomenological and hermeneutical scholarship Johnson extensively draws from. Johnson even takes the pains of delving into philological questions regarding certain key notions of Watsuji's thought . . . when Johnson develops a phenomenological analysis of fudo and uses it as a starting point for conceptually reframing Watsuji's philosophical thinking, he is operating in uncharted territory." --Hans Peter Liederbach, Contemporary Japan "Watsuji kept his religious and philosophical writings separate, so in bringing them together Johnson does a great service. He makes explicit the Buddhist ideas that seem to be informing Watsuji's treatment of Heidegger. And although it is not the stated goal of his study, Johnson ends up demonstrating that a fruitful exploration of Buddhist metaphysical concepts can take place within a Western philosophical framework. Here, we can see how the dharma and phenomenology can complement each other--the insights and long history of Buddhism offering ways to fill in some of the gaps in the much younger Western tradition, and phenomenology offering a new way of discussing experiences that Buddhism may simply declare 'beyond words' or relegate to the realm of poetry." --Matthew Abrahams, Tricycle