World Without Work: Technology, Automation and How We Should Respond [Kietas viršelis] 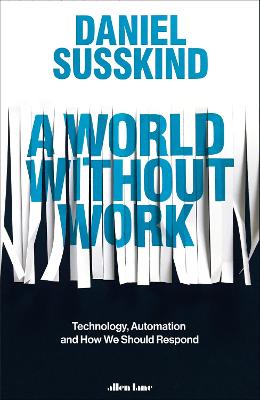 Didesnis paveikslėlis
Kitos knygos pagal šią temą:
Pastovi nuoroda: https://www.kriso.lt/db/9780241321096.html
Raktažodžiai:
'A path-breaking, thought-provoking and in-depth study of how new technology will transform the world of work' Gordon Brown 'Compelling ... Thought-provoking ... Should be required reading for any presidential candidate thinking about the economy of the future' NEW YORK TIMES New technologies have always provoked panic about workers being replaced by machines. In the past, such fears have been misplaced, and many economists maintain that they remain so today. Yet in A World Without Work, Daniel Susskind shows why this time really is different. Advances in artificial intelligence mean that all kinds of jobs are increasingly at risk. Susskind argues that machines no longer need to reason like us in order to outperform us. Increasingly, tasks that used to be beyond the capability of computers - from diagnosing illnesses to drafting legal contracts - are now within their reach. The threat of technological unemployment is real. So how can we all thrive in a world with less work? Susskind reminds us that technological progress could bring about unprecedented prosperity, solving one of mankind's oldest problems: making sure that everyone has enough to live on. The challenge will be to distribute this prosperity fairly, constrain the burgeoning power of Big Tech, and provide meaning in a world where work is no longer the centre of our lives. In this visionary, pragmatic and ultimately hopeful book, Susskind shows us the way. "This is the book to read on the future of work in the age of artificial intelligence. It is thoughtful and state-of-the-art on the economics of the issue, but its real strength is the way it goes beyond just the economics. A truly important contribution' Lawrence Summers, former Chief Economist of the World Bank 'A fascinating book about a vitally important topic. Elegant, original and compelling'Tim Harford, author of The Undercover Economist
Show moreShow less

Fascinating and tightly argued * Sunday Telegraph * Susskind's economic perspective makes the conundrum crystal clear, and he makes a convincing and illuminating argument to decelerate the onset of global "automation anxiety."A complex yet lucid and surprisingly optimistic account from the frontlines of technology addressing the challenges facing the human workforce. * Kirkus Reviews * Eloquent and humane, A World Without Work moves the debate beyond the illusion that technology always creates more jobs than it destroys and provocatively explores the role of work in human life and what to do when that role evaporates. -- Stuart Russell, author of 'Human Compatible' and Professor of Computer Science at the University of California, Berkeley This is the book to read on the future of work in the age of artificial intelligence. It is thoughtful and state-of-the-art on the economics of the issue, but its real strength is the way it goes beyond just the economics. A truly important contribution that deserves widespread consideration. -- Lawrence Summers, former Chief Economist of the World Bank, Treasury Secretary for the Clinton Administration and Director of the National Economic Council for the Obama Administration Daniel Susskind has written an important book on an equally important topic: the future of work in an economy driven by the advances in artificial intelligence. His conclusion is that ultimately there will be less work, or at least less paid work. This will shake the foundations of our economy and our society. Our institutions will have to be transformed. It will be a daunting challenge. We have to start thinking hard about it now. -- Martin Wolf * Chief Economics Commentator, 'The Financial Times' * A superb and sophisticated contribution to the debate over work in the age of artificial intelligence. Susskind approaches the debate with a great command of the evidence and with excellent judgment. He takes on all of the major debates: whether new jobs will replace those that disappear, how the income distribution will be affected, and how individuals are likely to allocate their time in the future between work, leisure, study, and other activities. Never glib, consistently wise and well-informed, this is the book to read to understand how digital technologies and artificial intelligence in particular are reshaping the economy and labor market, and how we will live alongside increasingly smart machines. -- Jeffrey D. Sachs, Professor of Economics at Columbia University, Director of the UN Sustainable Development Solutions Network A fascinating book about a vitally important topic - and he writes with such elegance that you don't even notice how much you're learning. Elegant, original and compelling. -- Tim Harford, author of 'Fifty Things That Made The Modern Economy' and 'The Undercover Economist' A pathbreaking, thought-provoking, and in-depth study of how new technology will transform the world of work. * The Right Honourable Gordon Brown * An excellent and timely piece of analysis ... Susskind combines a mastery of global research with insight into how government works. A book of immense importance that demands to be taken very seriously by No. 10, and by anyone who cares about the future of our country and world. * New Statesman * Compelling ... Thought-provoking ... Should be required reading for any presidential candidate thinking about the economy of the future. * New York Times *

A brilliant young economist explains how to meet the challenge of automation and rethink the future of work.
Daniel Susskind is a Fellow in Economics at Balliol College, Oxford, and the coauthor of The Future of Professions, named as one of the best books of the year by the Financial Times, New Scientist and the Times Literary Supplement. Previously, he worked in the British Government - as a policy adviser in the Prime Minister's Strategy Unit, as a policy analyst in the Policy Unit in 10 Downing Street, and as a senior policy adviser in the Cabinet Office.
Show moreShow less
Prisijungti Naujas vartotojas